With global grain supplies razor thin and China buying record-large volumes to stoke their hog expansion, grain prices have reached their highest mark in over seven years. And with the 2021 U.S. growing season just getting kicked off, Mother Nature seems intent on pushing prices even higher.

Dry conditions have plagued a wide swath of the U.S., especially the West where drought is firmly entrenched and not expected to find much near-term relief (US Seasonal Drought Outlook, Climate Prediction Center, NOAA) .

In the key grain growing states from the Plains to the Eastern Seaboard, drought conditions are perhaps not as severe as the West, but they are worrisome given the tight grain supply situation. Any hint of production problems from the U.S. grain belt could prove explosive for grain markets.

Some in the farming sector (Drought Threatens Part of North America) are starting to compare drought-like conditions in effect today to those at the start of the 2012 growing campaign.

That year went down as one of the most heat-scorched and dry summers in recent history. In 2012, the continental United States experienced the highest average temperature for June to August since 1936.

In corn-rich Iowa, daily high temperatures averaged 88 degrees in the summer of 2012 — 5 degrees higher than normal. And precipitation was a paltry 4 inches over the July and August period compared to 8.5 inches normally.

The end result was a disaster for crop yields, with corn and soybeans yields suffering steep losses. And grain markets set new record highs as a result.

A common weather saying is that "Drought begets more drought.'' When soils are dry, the sun's energy heats the air instead of evaporating water.

That raises temperatures, which leads to more dryness, which allows drought to spread even further. And if that is the case, then a wide swath of the country is in for a challenging summer season.

According to the widely-watched drought monitor system at the University of Nebraska, 44% of U.S. counties are in some measure of dry or drought-like conditions as of May 20, 2021.

While that is extensive, it is still shy of the situation in 2012 at this time of year, when nearly six out of every 10 counties were seeing the effects of some form of drought.

The two maps below illustrate the similarities and differences between current conditions (top map) and what occurred in 2012 (bottom map) at this time of the season.

It is the Delta region where the two years diverge the most, and indeed holds a crucial key that explains why it seems unlikely that 2021 will be a repeat of 2012.

In 2012, moisture emanating from the Gulf of Mexico was blocked from flowing up through the continental U.S. as a result of tropical disturbances. This cut off the Central U.S. from its principal source of summertime moisture.

But this year, the exact opposite is in play.The moisture out of the Gulf region has an unobstructed runway into the U.S., bringing lots of moisture and, in some regions, too much moisture.

Areas from Eastern Texas to Mississippi have been deluged with over 20 inches of rain in the past 60 days. These nearly continuous storm tracks generally make their way into some parts of America’s Grain Belt.

Missouri has been a big benefactor, getting above-average rains in the past 45 days, but beyond that, some states have missed or only partially caught some of these moisture systems.

The naturally occurring weather phenomena known as La Niña is fading as the U.S. enters its summer growing season.

The La Niña, and its weather sibling, El Niño, are terms used to describe either cooler or warmer-than-normal sea temperatures along a section of the equator in the Pacific Ocean, known collectively as the ENSO Phase.

Scientists have long recognized that depending on which ENSO Phase is in play (or Neutral if it's neither of the two phases), it can lead to important and predictable weather patterns around the globe (see NOAA’s ENSO site).

In April, the La Niña classification was removed as sea temperatures near the equator warmed enough to push the ENSO Phase to Neutral.

But while the classification from one phase to the next is a matter of sea temperature metrics, that does not imply there is a clean switch in the weather patterns.

Just like an overstimulated and tired toddler oscillates between wanting to sleep and staying awake for more excitement, so too does the La Niña phase not quietly drift away once it's no longer the listed ENSO Phase.

As such, weather patterns at times can still exhibit La Niña-like conditions. For the U.S., this La Niña pattern is typically a dry West and southern part of the U.S., coupled with cooler and drier weather out of western Canada and the Northern-tier U.S. states.

But again, we are not exactly in La Niña, so the weather in recent months has appeared La Niña-like at times, but then shifted dramatically to the opposite extremes.

Heading into the summer, this bimodal weather behavior is expected to continue although the oscillations should die down.

The expectation based on coming out of a La Niña is that the U.S. spring and summer will have drought-like conditions persisting, especially in the West and into the Central/Northern Plains.

How severe and how far that drought creeps into the heart of grain country will be a central question for farmers and commodity traders alike as both closely watch each iteration of weather forecast models that foretell coming rain events.

Unfortunately, that could be a fool's game  in a year without a clear direction from the ENSO phase.

Because ENSO phases are a tell on global weather patterns, most forecasting models integrate that lean into their underlying wiring.

But when the ENSO cycle isn’t in play, or worse, when it is in a state of flux between two states, that can really throw off short-range forecasts, especially for precipitation, which is a necessary elixir for farming and crop growth.

Indeed, the current meteorological conditions are such that the most popular and widely-used U.S. forecast model, NOAA’s Global Forecasting System (GFS) is tending to put more precipitation in forecasts than is actually being realized.

Because the GFS is a large-scale numerical algorithm constructed from countless mathematical equations trying to capture the earth’s atmosphere and seas to predict future weather, it is only as accurate as the underlying equations can dictate.

And its errors are not easy to correct, but it is important for observers to realize the limitations of precipitation forecasts — especially in a year like this.

To illustrate the wide-scale errors that can happen, the maps below depict the forecasted precipitation from the GFS (on the left), and the actual precipitation that fell (on the right). The forecast was made on May 12, 2021 for the upcoming May 18-20 time period, or about a week ahead.

In that forecast, there was a great degree of precipitation expected with dark green areas showing many farmers would be in the path of 2 inches of rain and at least some meaningful moisture expected in drought impacted areas of South Dakota, Minnesota and Western Iowa.

Unfortunately, many fields were missed or saw significantly less rainfall than was projected. Wide swaths of Western Minnesota saw zero or only trace amounts of rain and the dry areas of Iowa and South Dakota came up short compared to expectations given by the weather forecast.

For example, in the forecast the entire state of Iowa was expected to receive a state-wide coverage averaging 1.1 inches, but when the time came it got only 0.55 inches.

This seemingly small miss, has massive economic ramifications for the country’s largest corn producing state if rainfall forecasts continue to come up short.

As the growing season progresses even more attention will be paid by the farm sector to the weather predictions. But at least in the near-term, caution should be taken in placing too much emphasis on overly optimistic rainfall projections.

Strategies to manage the uncertainties

Faced with exceptionally tight supplies and skyrocketing demand, every bushel will be critical to help stave off even higher grain prices.

Early season drought does not bode well for a banner production year in the U.S. grain belt, but it's the early innings of a long ball game.

Weather in June, July and August, the critical time for the U.S. corn and soybean crops, will determine if farmers hit a home run or strike out this season. That said, weather is not random, just hard to predict.

And areas that are dry today have better than coin-flip odds of being dry and problematic into the summer.

For farmers in these drought areas, here are some strategies to consider this season:

Earn $250 for Every Friend Referral to FBN Direct®

Products sold or distributed through FBN Direct are offered by FBN Inputs, LLC and are available only in states where FBN Inputs, LLC is licensed and where those products are registered for sale or use, if applicable. Please check with your local extension service to ensure registration status. Always use the most conservative label instructions when adding an adjuvant to a solution. Remember: Geography and accompanying weather and soil conditions impact the functionality of adjuvants. If there are gaps in the language on the label, consult an agronomist before use.

FBN Brokerage services are offered by FBN BR LLC, dba FBN Market Advisory - NFA ID: 0508695. Commodity trading, including futures, hedging and speculating, involves substantial risk of loss and may not be suitable for all investors. Past performance is not necessarily indicative of future results. All information, publications, and reports, including this specific material, used and distributed by FBN BR LLC shall be construed as a solicitation. FBN BR LLC does not distribute research reports, employ research analysts, or maintain a research department as defined in CFTC Regulation 1.71.

By Kevin McNew
More posts by this author
Related posts 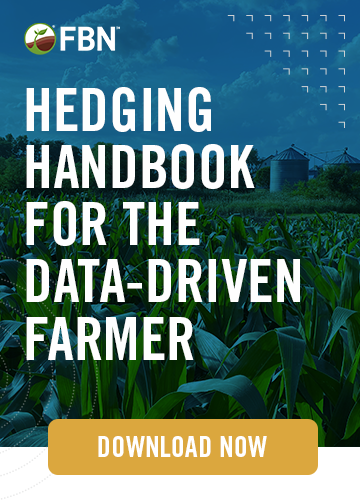 What’s on the Horizon As Drought Conditions Worsen Across U.S.?