The USDA’s Cattle on Feed report for October was fairly benign as placements, marketings and inventory levels were all pretty close to the pre-report estimates. We believe that the slight 1% year-over-year (YoY) decline in cattle in feedlots is neutral and can be offset by larger placements in Texas, Nebraska and Colorado and can be supportive of local corn basis. Using data from the USDA’s weekly feeder cattle reports, we believe that normal fall run should occur in Nebraska, Colorado and Kansas, which can help maintain on-feed inventory levels and can support local corn basis.

- At 455,000 head, cattle placements into Texas feedyards rose 15% YoY and were +5% from August. In typical Texas fashion, the September placement structure continues to favor lightweight calves.

- Weekly Mexican feeder cattle imports during September were slightly higher than in 2018. Most of these cattle are destined for Arizona or Texas feedlots, the import pattern illustrates that a strong dollar continues to draw on Mexican cow/calf level supplies.

The October 1 number of reported heifers on feed—4.41 MH—was the second largest value for the month going back to 2000. The USDA reports the by-class categorization in the quarterly Cattle on Feed reports during January, April, July and October. We believe that this number is noteworthy because the percentage of heifers on feed can be used as a potential signal about the status and potential direction of the U.S. breeding herd. Using the chart below, the number of heifers on feed as total percent of cattle on feed provides a signal that the status of theU.S. breeding herd is entering into either a mild contractionary or late-cycle stabilization phase.

We make this statement because during the 2014-2016 U.S. beef cattle cycle, heifers were aggressively being retained to help capture positive producer level cow/calf margins. Since 2016, the number of heifers entering the feedlot in percentage terms has been steadily increasing, suggesting that the U.S. cattle herd has exited the expansionary portion of the cycle and has moved toward a state of equilibrium.

Overall, the sharp YoY 15% increase in the Texas placements combined with the gradual increase of cattle placements in Nebraska and Colorado is positive for corn disappearance and can be supportive of corn basis in the key cattle feeding states. While the bulk of the fall run in Kansas, Nebraska and Iowa occurs during October, we believe that the data from the USDA’s weekly Feeder & Stocker report illustrates that October cattle placements will be larger than 2018. If October placements in Kansas and Nebraska are above 2018 levels, we can expect that local and regional corn basis in key cattle feeding states to be supported as demand should increase.

We believe that the heifers as a percent of cattle on feed shows that the U.S. beef cattle breeding herd is either in a state of equilibrium or in a mild recalibration period. If the breeding herd maintains its current levels, we would expect localized future corn demand, 2021 and beyond, in the primary cattle feeding states of Texas, Kansas, Nebraska and Colorado to stabilize.

Copyright © 2019 FBN BR LLC. All rights Reserved. FBN Market Intelligence is distributed by FBN BR LLC. Contact 877-472-4607 for more information. For the purposes of quality assurance and compliance, phone calls to and from FBN BR LLC may be recorded.

We do not guarantee customers will receive specific benefits or value from participating in FBN BR LLC; results will vary. The data in this article is being supplied as a courtesy by FBN BR LLC. The risk of trading futures and options can be substantial and may not be suitable for all investors. All information, publications, and reports, including this specific material, used and distributed by FBN BR LLC shall be construed as a solicitation. FBN BR LLC does not distribute research reports, employ research analysts, or maintain a research department as defined in CFTC Regulation 1.71. This article contains information obtained from sources believed to be reliable, but its accuracy is not guaranteed by FBN BR LLC. Past performance is not necessarily indicative of future results.

Disclaimer: Futures and Option trading involves substantial risk, and may not be suitable for everyone. Trading should only be done with true risk capital. Past performance, either actual or hypothetical, is not necessarily indicative of future results. 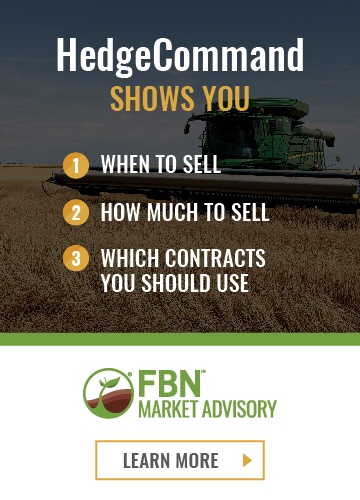