The SRE program exempts some refiners from their obligation to blend ethanol into gasoline. The program was designed around “economic hardship” qualifications, but waivers have more than quadrupled through 2017 from 2013 levels and have been issued to some of the largest and richest companies in the world. The exemptions result in a cap on domestic ethanol demand because the exempted gallons are removed from overall blending requirements.

The reduction in domestic demand due to SREs and reduction in international demand due to tariffs are having a profound impact. To date, the exemptions have caused a loss of 2.6 billion gallons of renewable fuel blending and nearly a billion bushels of corn demand. That decrease is translating to even more financial strain for farmers, who are already facing challenging times due to economics and weather.

WHAT CAN WE DO?

Biofuels supporters need to rally together to get the EPA to stop restricting this important market, and farmer voices are most important. One way to show your support is to add your voice to opposition on bad EPA proposals.

Iowa farmer Kelly Nieuwenhuis has been sharing his story. He recently spent several days in Washington lobbying in support of corn growers and the ethanol industry. “I’ve been saying the word ‘frustrated’ a lot because of the EPA’s handing out of SREs,” he said. “The EPA is restricting our growth, and when they do that, that’s favoring the oil industry.”

Associations across the country are working hard to protect this important market for your crops. The National Corn Growers Association (NCGA) issued a July 16 resolution urging President Trump to uphold his commitment to the RFS. Emily Skor, CEO of Growth Energy is active in DC with the message that “There is no legal or rational explanation for why EPA has quadrupled the number of secret exemptions to the world’s largest oil companies in the past 17 months.” POET is working diligently to share feedback with the EPA and is actively meeting with decisionmakers in Washington.

Elected officials including Sens. Chuck Grassley and Joni Ernst (R-Iowa), along with Iowa Gov. Kim Reynolds, have repeatedly noted that the EPA is issuing too many waivers to oil refineries.

“It’s unacceptable that EPA would set biofuel volumes below demand at a time when farmers, biofuel producers and agribusiness owners are forced to shed jobs and closed plants. I urge President Trump to compel EPA to reverse course and keep his word to the forgotten Americans who have faithfully stood with him,” Grassley said in a statement when the new ethanol mandate levels were announced.

Please join us in sharing your story and asking EPA to stop mishandling domestic ethanol policy.

Visit www.poet.com/comment to submit your comment to the EPA. Comments can be submitted until Aug. 30. We need you to stand up for the biofuels industry and rural America today!

By POET
More posts by this author 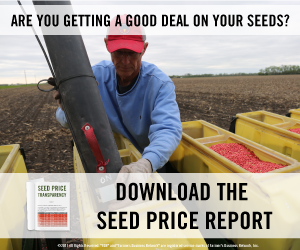 Flax Cash Prices on the Rise