When to Harvest Corn Based on Grain Moisture

There have been studies and debates by agronomists and researchers for years on the optimal moisture levels for corn at harvest. Here’s what the data we analyzed showed.

How does yield vary by harvest moisture?

The standard moisture for corn is 15.5 percent, so when grain is delivered at greater than 15.5 percent grain moisture, the weight is adjusted down. (This reflects the remaining weight when the grain is dried to 15.5 percent moisture, losing water weight in the process.)

In contrast, when grain is delivered at grain moistures below 15.5 percent, you’re paid for the delivered weight because weights are not adjusted up to what the grain weighed when water content was higher.

With that in mind, the graph below shows corn yields that we observed at different harvest moistures (with yields above 15.5 percent grain moisture adjusted down to the 15.5 percent standard, and yields below 15.5 percent moisture left unadjusted).

At moistures above the standard, we generally see similar yields. But we also observed slightly lower yields between 15.5 to 18.5 percent moisture.

As expected, yield drops sharply below the standard moisture, as weight is lost when moisture is removed from the grain.

And, keep in mind that from the perspective of profitability, not just yield, you may incur drying costs for grain delivered at moistures above the standard.

At what moisture level are farmers typically harvesting?

More than 38 percent of acres harvested within the FBN network are at 15.5-18.5 percent moisture.

We also noticed a trend (though not a surprising one to us) that farmers tend to harvest at slower speeds when harvesting wetter corn.

The wetter the corn, the slower the harvest speed, though only slightly.

Where are moisture levels the highest and lowest at harvest?

FBN network farmers in northern and eastern Corn Belt states tend to harvest at 18-20 percent moisture, while those in western and southern Plains states harvest closer to the 15-18 percent moisture range.

The map below shows average corn harvest moisture levels by state for the past four years.

There has been a slight trend for wetter harvests across the country in recent years, but the pattern is a fairly weak one, and there is substantial year-to-year variability.

Have corn harvest moisture levels increased or decreased over time?

As corn harvest continues to ramp up, we’ll be following along with this and other harvest trends. 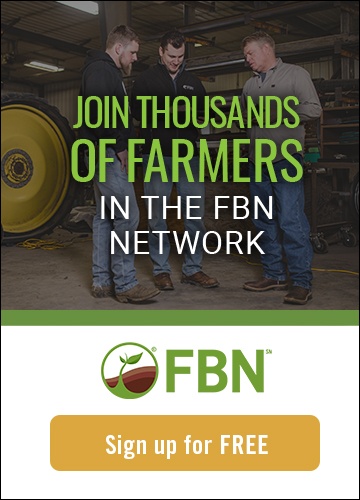