Guest Post: What Are the Benefits of Intercropping in Organic Farming?

Weed control can be a source of concern for organic farmers, not to mention those considering transitioning acres to organic. But with higher premiums for organic crops, many farmers are willing to take on the challenge.

One approach to obtaining sufficient weed control and getting the most out of your organic crops is through the practice of intercropping.

Intercropping is the cultivation of two crops together in the same field. It allows farmers to grow at least one high-value crop, while letting the cropping combination suppress weeds and bring agronomic benefit for the following crop year.

Not unlike planting a cover crop, intercropping can remove the need to use tillage as weed control and help prevent soil erosion.

A closer look at our intercropping trial

In 2019, B&B Irlbeck Farms partnered with Rhea Brothers to conduct organic intercropping trials. We discovered that intercropping could offer a solid economic return and provide a number of agronomic benefits. But there’s still much to learn.

Here are a few things we found during the trials:

Planting, harvesting and storing multiple crops at the same time can be quite involved. The key is to minimize the number of moving parts.

For example, separating yellow field peas and canola was a labor-intensive task that required five people: one combining, one driving the grain cart, one driving the semi, and two cleaning the crops into separate bins.

The next year, we utilized a process that allowed us to unload into a new grain cleaner that separates the crops. It took only one person to handle the cleaning process, and it was completed in a matter of hours.

Find a seeding rate that works for you.

Different intercropping mixes, fields and management practices will determine what seeding rate to use. The trials mentioned above saw seeding rates that were too high, some too low and next time will be somewhere in the middle. It may take a little trial and error to find the rate that works best for your operation.

Good planning is essential in an intercropping set up. Choosing products that have similar maturities, so they can be harvested at the same time is important, as is sourcing the seed and inoculum. Planting and harvesting may take a little more time, so be sure to add that cushion into your schedule.

Ready to start intercropping on your farm?

Intercropping can be a great way to improve your bottom line and cut out the stressful task of weed control on your organic farm. It may be a good idea to start on small acreage, and be aware it may take a few growing seasons to really make it a successful process.

If intercropping interests you, contact AgriSecure for information on how to get started with the practice on your farm. 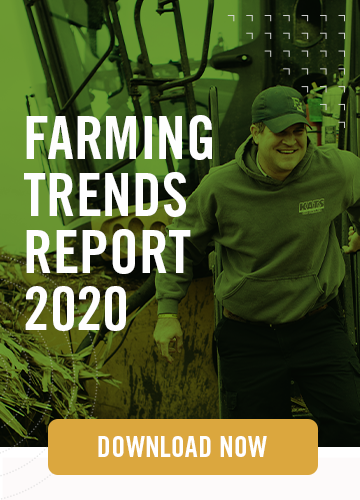